Skip to content
When initially acquired from the Philadelphia 76ers in the summer of 2016, Ishmael ‘Ish’ Smith was seen as a prototypical backup point guard for Reggie Jackson and the Detroit Pistons.  Since entering the NBA as an undrafted free agent in 2010 out of Wake Forest, Smith has bounced around between 10 different franchises but has managed to stay on an NBA roster.
Midway through the 2014-2015 season, Smith found himself in the center of the tanking process for the 76ers. Although they weren’t winning, Smith benefited by getting playing time and being able to showcase his point guard skills.  That season, Smith played in 25 games for the 76ers while starting in 14.  He averaged 27.1 mpg, scoring 12.0 ppg, and dishing out 6.1 assists.
Prior to the following season, on October 26, 2015, Smith was claimed off waivers exactly one day before the season opener.  Smith didn’t waste any time proving that he belonged as he scored 17 points, and recorded 9 assists in 38 minutes off of the bench. From that point on, Smith has been labeled as a threat and has garnered enough respect to at least be a formidable back up.
That same season, in December Smith was traded back to the 76ers, where he finished playing in all 50 games as their starting point guard.  For the first time in his career, Smith was playing 30-plus minutes a game, and if it was an audition for his next gig, he ace’d it.  While playing 32.4 mpg, Smith averaged 14.7 ppg, 7.0 apg, and 4.3 rpg.  Fittingly, Smith put up those numbers in the last season of his previous contract, making himself a sought after free agent.
With the departures of Brandon Jennings and Steve Blake, the Pistons where in the marker for a backup point guard, and Smith fit the bill.  On July 8, 2016 Detroit signed Smith to a 3-year, $18 million contract, and so far the signing has proved to be legit.
Fresh off their first playoff appearance since the 2008-2009 season, the signing of Smith was projected to strengthen the team for another playoff push.  However, it turned out that Smith would be stepping into a much larger role than expected as he had to start a number of games due to the absence of Reggie Jackson.  Jackson only played in 52 out of 82 games in 2016-2017, and that allowed Smith to make 32 starts in his first season with the Pistons.
With more talent around him, and much more scoring to go around, Smith’s numbers slightly dropped.  That was understandable mainly because Smith’s first year with the Pistons lacked much stability with him not knowing when Jackson would be available.  Smith managed to net 9.4 ppg, 5.2 apg, and 2.9 rpg in 24.1 minutes of action, while becoming a fan favorite.
Although the Pistons missed the playoffs, Smith did enough to gain the respect of Van Gundy.   What Van Gundy liked most about Smith is the energy he brought as opposed to a gimpy Jackson still not %100 recovered from his injury.  In early March with a playoff berth on the line, Van Gundy began to hint towards making the move of inserting Smith as the starter over Jackson.

From Aaron McMann: MLive.com
“He says he’s fine, our medical people say he’s fine,” Van Gundy said of Jackson. “The difference right now is an energy difference. That’s what I talked about with Reggie today. I think for us to be successful with him on the floor, his defense and his energy have to improve.”

Jackson could never seem to get it going, so Van Gundy ultimately decided to name Smith as the starter for a March 22 game against the Bulls.  The Pistons couldn’t quite complete the playoff push, and the absence of Jackson had a much larger effect on that than the presence of Smith.
With Jackson expected to be full go this upcoming season, and with the acquirement of Avery Bradley, Smith is still expected to be a key cog in the backcourt.  Van Gundy has formed what has the potential to be a solid backcourt, and Smith is content with what they have looming. 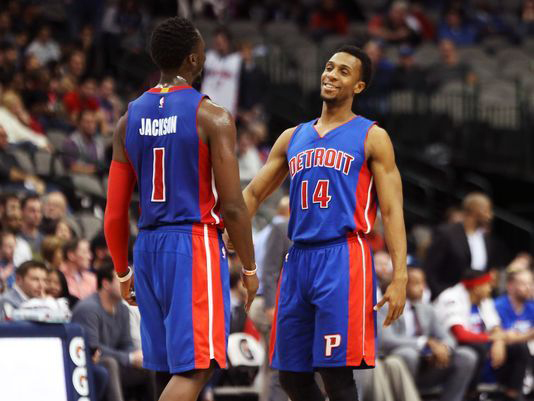 In an off-season where Jackson’s name has come up in multiple trade scenarios, Smith has still kept in touch with him, and now that all the smoke seems to be cleared they’re just focusing on the new season.

From Keith Langlois: NBA.com
“I’ve been talking to Reggie. We texted the other day,” Smith said. “He’s doing well. He’s excited. Bounce-back season for him and myself and everybody, so he’s excited.”

Smith is well aware of the backcourt acquisitions of Bradley, Langston Galloway, and Luke Kennard.  Smith believes getting guys of that their caliber will only give the Pistons a boost and he’s ready to get to work with them.

From Keith Langlois: NBA.com
“We got a heck of a player in Langston, who can shoot the crap out of it,” Smith said. “Great defender. Avery, I think he’s first-team All-Defense and I think he’s offensively better than what people give him credit for. He can shoot the basketball. He’s a heck of a backcourter. Luke, shoot, I’m not a Duke fan” – Smith played at ACC rival Wake Forest – “but I’m excited about Luke. He reminds me of – I don’t want to say this, because Chris Mullin is a Hall of Famer – but he reminds me a little of Chris Mullin and how he plays, his niftiness.”

Smith enters this season expecting the return of a healthy Jackson, but in the back of his mind he knows he has to be ready anytime his name is called.  The thing is, if Smith is needed to produce at a starters rate, he’s confident that he can do so.  Hopefully, that won’t be the case, as Smith was brought in to be a solid backup.  However, Smith is highly confident in where his game is at this point in his career.
I expect Smith to continue to thrive in his role as a backup, and when he enters the game there won’t be much drop off from the point guard position.  Smith still hasn’t shown that he’s capable of being a starter on a playoff team, but what he has shown is that he’s going to play hard and bring energy where it’s needed.  Behind Jackson and Bradley, Smith should be the next in line as far as mpg for a Pistons’ guard in 2017-2018.
Featured Image: Brett Davis-USA TODAY Sports