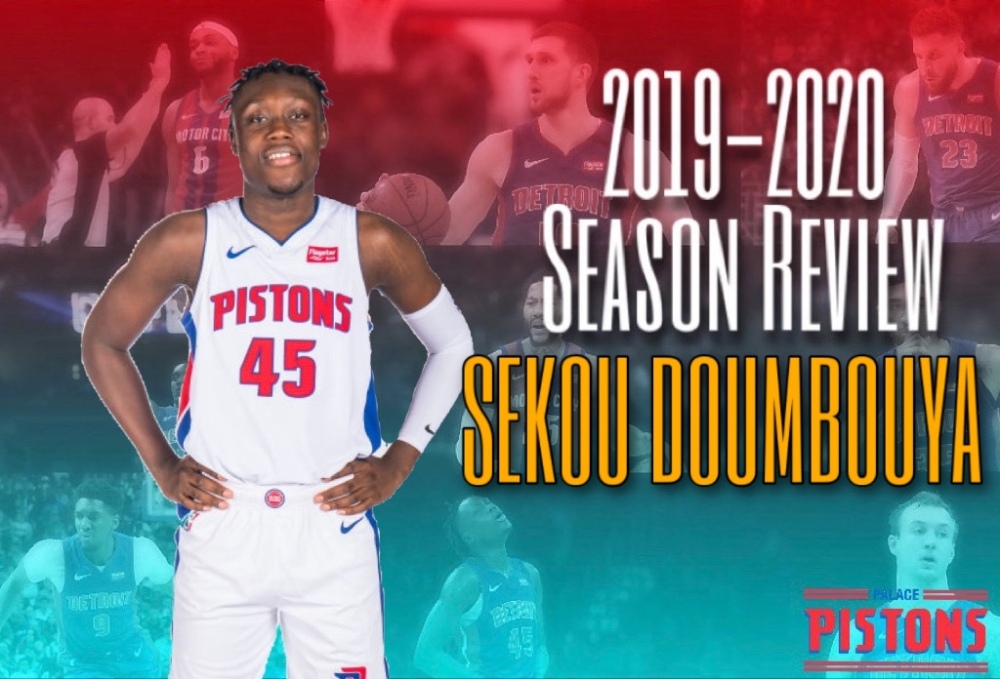 The plan was not to play Sekou Doumbouya 20 minutes per game during his rookie season with the Pistons. The plan was for Doumbouya to spend much of his time in the G League with the Grand Rapids Drive, developing with the Pistons’ minor league club and accustoming himself to a new country. But Detroit’s season unraveled before it even started. Blake Griffin was hurt before the season even began. Reggie Jackson went down by game two, and Derrick Rose and Luke Kennard each had their issues with the injury bug early in the season. It was clear very early on that the Pistons would not be returning to the postseason, and that major changes to the franchise were on the way.

Meanwhile, as the Pistons fell apart, Doumbouya was burgeoning with Donnie Tyndall in Grand Rapids. The Drive were one of the best teams in the G League even without Doumbouya. But with him, they were an incredible force of talent. With fellow rookie draft pick Jordan Bone running the show and Donta Hall grabbing every rebound in sight and dunking every ball he touched under the rim, Doumbouya was thrust into a great situation for the youngest player in the NBA.

Sekou Doumbouya continues to dominate in the G League

But the Pistons had fallen apart, and Doumbouya was brought up to the big leagues, earning a chance to play for one of the most discombobulated Piston teams in recent memory. He went from the most ideal developmental situation for a player under his circumstance to playing for perhaps the worst team in the NBA.

Doumbouya’s minutes with the Pistons were mainly filled with the struggles that you would expect from an 18-year old playing basketball in the NBA for the first time. He wasn’t ready for the speed and athleticism of the game. He wasn’t a disciplined enough defender or a smooth enough ball-handler. Yet Doumbouya still managed to have some very bright moments that reminded the franchise and its fans why the team was so high on him in the first place.

Oddly enough, Doumbouya’s brightest moments came at the beginning of his time with the Pistons. In his first five appearances with the team, he played a total of just about 20 minutes. Then on January 2nd, the Pistons’ first game of 2020, Doumbouya not only played 27 minutes, but started against Kawhi Leonard and the Los Angeles Clippers. It almost appeared to be a set up. Were the Pistons trying to make Doumbouya look bad? Well, if that was the case (obviously not), it didn’t work, not at all. Doumbouya finished with a double-double, 10 points and 11 rebounds. He followed that up with another double-double, 16 points and 10 boards versus Golden State. His best game came against the Boston Celtics, in which Doumbouya led Detroit to a win against one of the best teams in the Eastern Conference. He scored 24 points on 10-13 shooting in just 28 minutes.

Sekou Doumbouya with the block one on end and the 3-pointer on the other! pic.twitter.com/mDbGhI1ff2

Following Doumbouya’s hot play, I was already deeming him a star in the making.

I may have spoken too soon and too brazenly.

Unfortunately, Doumbouya didn’t have another performance of that stature for the rest of the year. His shot struggled and his confidence wavered. In all honesty, he likely should have been sent back down to the G League, but the Pistons decided against that, as the rest of the season was meant for the development of their younger players as the team began to rebuild. While it would be easy to slander Doumbouya a bust for his rookie season, it’s simply not the case. Sure, it wasn’t a perfect season, but the situation he was thrust into was horrific. He played with more role players than starter quality players and the lineups and rotations seemingly changed every game for a team that lacked continuity all year.

The suspension of the season was likely a good thing for the rookie. An opportunity to refresh and take in the whirlwind of your first months in the most talented league in the world should only help a teenager who came to America just one year ago. The suspension of play allows for time to watch tape, workout, and learn from a front office and coaching staff that needs Doumbouya to be the special talent he is capable of being. However, just as the suspension of the season was good for him, a secondary bubble for the teams that will not be competing for a playoff spot and the NBA Championship in Orlando would be good for Doumbouya, who needs to continue to develop.

Next season should be a better situation for Doumbouya. Assuming he is still on the team, Blake Griffin should get to share the floor with Doumbouya for the first time, as should Luke Kennard, another young piece that Detroit needs to perform and grow for their rebuild to work. The Pistons will also have another top draft pick on the team, perhaps Doumbouya’s friend Killian Hayes, to grow as part of Detroit’s core alongside the 6’9” wing.

It should be remembered that the plan for the Pistons was to compete for a playoff spot this year. Instead, their star played just 18 games, they traded away their franchise center and bought out their starting point guard. The plan was for Doumbouya to sparingly see the floor of Little Caesars Arena this year and perhaps even into next year as well. When he was drafted by the Pistons he was deemed a project. And he still is one. There were bumps and breakthroughs throughout the first phase of the completion, but it’s clear that this project is worth finishing.

All stats courtesy of basketball-reference.com and stats.nba.com.