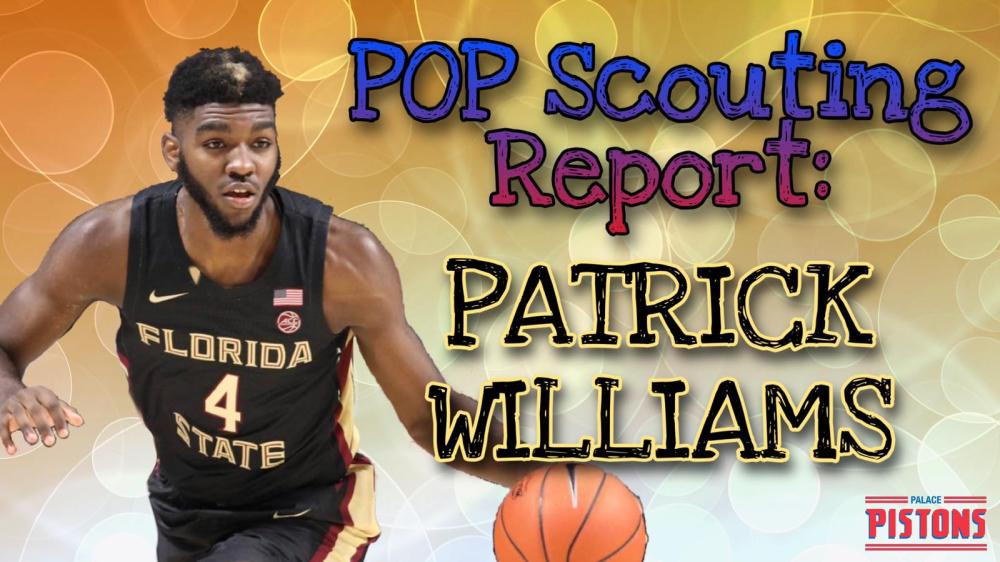 Having turned 19 in August, Florida State freshman forward Patrick Williams is one of the youngest prospects on the board in the 2020 NBA Draft. On film, you wouldn’t be able to tell. Williams appears freakishly athletic in every picture & video you’ll find him in, listed at 6-8, 225, with a 6-11 wingspan. Before attending Florida State, Williams finished 20th in the Rivals 150 for the class of 2019.

Williams was simply remarkable in his 22 minutes per game at Florida State, coming off the bench and averaging 9.2 points, four rebounds, one steal, and one block in his 29 contests. He’s an explosive, quick-twitch athlete who disrupts opposing possessions with his ability to cover ground and explode up to protect the rim. His athleticism jumps off the page.

Defense is the calling card for Williams, who has shot up draft boards and is being linked to the Pistons at the 7th pick. Not only has he displayed how his defensive abilities and frame will translate to the next level, but his drive on that end of the floor also seems like it isn’t going away anytime soon.

“He shows in his interviews, too, sort of a hunger for growth. Like, you don’t hear a lot of freshman come in and eagerly talk about like ‘I want to get better on the defensive end.'”

Offensively, Williams makes plays with his body. His size and athleticism scored most of his points for him in his freshman year at Florida State. He crashed in for offensive rebounds, caught lobs, and showed flashes as a capable jump shooter. Free throw percentage is often seen as an indicator for NBA shooting development, and Williams shot 83% from the line as a Seminole. There’s a chance he becomes a much more balanced, 2-way player in Detroit.

The knocks on Williams come from his limited sample size and deference as an offensive player. Being 19 and coming off the bench for all 29 games of his freshman year, there’s a worry that what scouts see in him are only flashes and that he won’t be able to contribute with the same efficiency with an increased role and NBA competition. Williams shot just 32% from three at Florida State, which is too low to be considered a plus shooter and shot creator for an NBA team. Like other prospects, Williams has had ample time to work on these concerns and impress teams in workouts and interviews.

Players like Williams, guys stuck between being too big and unskilled to play on the wing, but too short to play as a forward, used to be unable to find a place in the league. Now, it’s one of the most important roles on a team. Williams projects to be a small-ball four in the NBA, who can slide down and guard wings in some lineups. His fit in the league depends on his three-point shooting and overall scoring ability. If Williams can grow into a dynamic scorer, he has the defensive chops to grow into a Paul George-type player. If he remains solely an athletic defensive presence, he could end up contributing like OG Anunoby, as awesome isolation and positional defender who keeps teams honest with rare scoring.

If Williams ends up in Detroit, he ends up in a crowded frontcourt, alongside Blake Griffin, Sekou Doumbouya, and Tony Snell. Williams has the chance to contribute from day one if he’s able to show Dwane Casey and the coaching staff that can he can defend top-level NBA talent. His motor and ability to score without the ball are similar to Sekou Doumbouya in essence, but not form. If Sekou glides in the air like an airplane, Patrick Williams explodes like a rocket ship.

Williams could benefit from playing time as a rookie in order to get used to the speed of the offensive game. He also fills a position of need in Detroit, as he would become the biggest wing they’ve had since Grant Hill. The Pistons have lots of guards and a few bigs to work with, but Williams fills a need as an elite wing defender. He can come in and defend big stars like Ben Simmons and Jayson Tatum much better than Tony Snell or Svi Mykhailiuk.

The mock drafts are all over the place with Williams. Originally being mocked in the late teens, he’s been mocked to the Pistons at 7, the Spurs at 11, and the Kings at 12. John Hollinger of The Athletic has reported that Williams may have a promise from the Pistons at 7, showing that he could even rise higher than the 7th pick.

A player like Williams is hard to come by in today’s NBA, and that’s why I think he’s shooting up draft boards. Teams dream of having big-bodied wings who can defend the other perennial all-star big-bodied wings, like LeBron, Jimmy Butler, Kawhi, and Paul George. Williams has the size and defensive ability to do just that, and he’s not a complete offensive dud to the point where he’ll just become a specialist. It’s easy to imagine Williams as an important piece to a really good team, a flexible defender who can guard 3-5 and change games with his athleticism and defensive prowess.