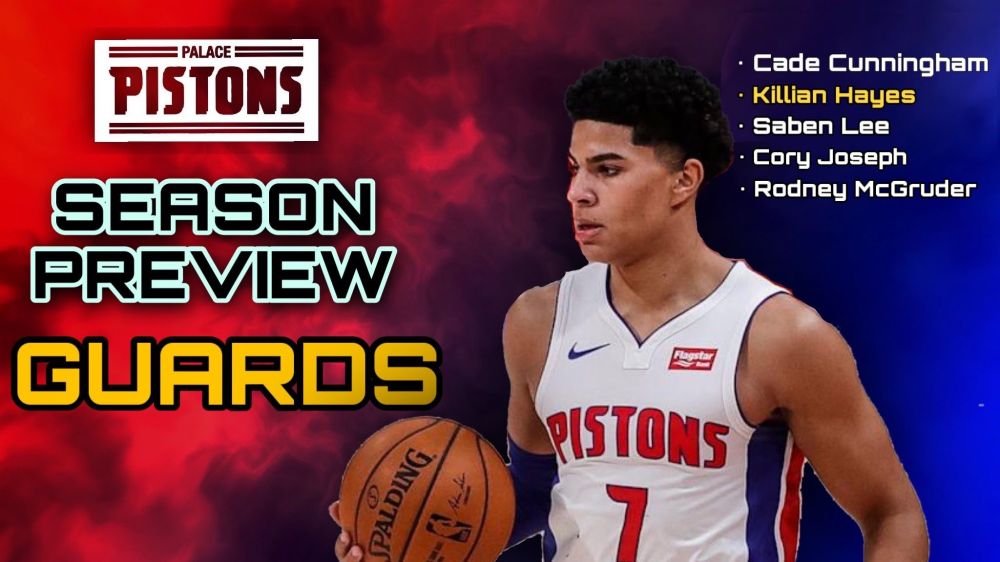 Anyone who has watched the Detroit Pistons on a regular basis since the departure of Chauncey Billups in 2009 can tell you how difficult it’s been for the organization to find one, let alone multiple, reliable playmakers. For the first time since, well, ever, they now have the opposite problem. With this year’s first overall pick Cade Cunningham and last year’s seventh overall pick, Killian Hayes in the fold, one of Dwane Casey’s main tasks as head coach this season is to find the proper balance between the two young guards. As if that wasn’t hard enough, he also needs to figure out whether veteran Cory Joseph or second-year spark-plug Saben Lee is the right choice for his backup point guard spot, or if he can even manage to play all four in some combination of on and off-ball responsibilities. Rodney McGruder is also back in Detroit, presumably there to offer leadership to an extremely young guard rotation.

There are a lot of questions about the Pistons guards that need to be answered this season. What will Cunningham’s role on this team look like in his rookie year? Can Hayes take the necessary leap as a scorer and shooter to pair him alongside Cunningham long-term? Can Saben Lee or Cory Joseph be counted on coming off the bench? It’s on Dwane Casey to figure it out because the Pistons’ future hinges on these answers. Either way, all eyes in Detroit, and on the national level, will be on the Pistons guards to open the 2021 season.

Well, this is why we’re all here, isn’t it? Cunningham is Detroit’s first number one draft pick since Jalen Rose’s father Jimmy Walker back in 1967, and their best chance at a homegrown superstar since Grant Hill. Consistently the best player on the court in high school, college, or with the USA U-19 team, the 6’6 (or is it 6’8?) Cunningham is a natural point guard, but it’s his overall skill set that elevates his potential into the stratosphere. A supremely gifted playmaker with great vision, size, and technique, he is able to zip passes over either shoulder to the weak side when double-teamed, run the pick and roll, post up against smaller defenders, and consistently finish at the rim. Some questioned his shooting abilities coming out of high school, and Cunningham responded by shooting 40% from three in college from a variety of looks, including isolation pull-ups. He’s also a good defender, with tremendous versatility and the ability to not only pick pockets on the perimeter, but also provide solid help-side rim protection. He’s not an elite athlete, and he might not lead the Pistons in a single statistical category this season, but Cunningham is a natural leader who makes his teammates better and has improved his game every single year he’s played basketball. Make no mistake about it, Cade Cunningham is the future of the Pistons franchise and the well-deserved favorite for Rookie of the Year.

The first pick of the Troy Weaver era has a lot to prove this season. Despite only appearing in 26 games last season, Hayes’ strengths and weaknesses are already fairly obvious. He’s one of the most naturally gifted passers in the entire NBA, able to throw easy lobs to big men, but also zip picture-perfect three-quarter court bounce passes in transition. At 6’5, with excellent footwork, recovery, and surprising strength for someone who won’t be able to legally order a beer until next July, Hayes also profiles as one of the league’s best young defensive guards. It’s not hard to see a near-future where he and Cade Cunningham are the league’s most imposing defensive backcourt duo. The main question surrounding him is whether his offensive game can mature quickly enough to fit alongside Cunningham as a starter. Hayes was one of the NBA’s worst scorers last season, shooting an abysmal 27% from deep and an equally ugly mark of 44% from within three feet of the rim. You can see the potential for a deadly midrange game, complete with a slick floater package and runners off the glass, but if Hayes is going to stick around in Detroit as a starter, he needs to either begin hitting threes or making layups ASAP. If Hayes can grow as an offensive option, the Cade and Killian Connection has the potential to be one of the league’s most unique and difficult backcourts to play against. If not, his time next to Cunningham could be over very quickly.

One of the more welcome surprises of Troy Weaver’s first draft class, Saben Lee has the opportunity this season to establish himself as the Pistons backup combo guard for the next several years. After being taken in the second round, Lee signed a two-way contract with Detroit, but injuries and trades quickly pushed him into semi-consistent playing time. Lee didn’t exactly light up the stat sheet, averaging 5.6 points and 3.6 assists in a little over 16 minutes per game, but his slithery drives towards the rim created shots for others, and he scored efficiently enough to earn more chances as the season went on. That led to him signing a three-year contract this offseason, worth a little over $5 million total. If Lee can continue to use his explosive athleticism (he’s willing to try dunking over anyone, and will absolutely catch a body at some point) pair it with his funky, yet effective so-far three-point shot and improve his defense, he should be able to solidify his place in the Pistons rotation at either backup guard position.

Saben Lee got his poster! pic.twitter.com/ygCIQk7hOP

A mid-season acquisition, the tenth-year veteran out of Texas played what was undeniably the best basketball of his career for the Pistons, dropping 12 points and 5.5 assists per game on 58% true shooting. Those contributions likely earned him his two-year, $10 million contract this offseason, and he should receive ample playing time as the Pistons look to him for veteran leadership and a steadying presence in an extremely young backcourt. It remains to be seen exactly what his on-court role will look like, with Cunningham, Hayes, and Lee all likely to play a decent amount of minutes this season, but if any of them should struggle or deal with injuries, Dwane Casey will feel extremely comfortable going to Joseph for 25+ minutes per game. Don’t be surprised if he plays a significant role off the bench this year.

“The Scavenger” is back in Motown after playing less than 200 minutes for the Pistons last year. While there’s not much to say about McGruder as an on-court presence, the organization clearly values his veteran leadership (an oft-overlooked, but crucial aspect of any young team) and feels as though they can depend on him to contribute in emergency situations. He was extremely efficient when called upon, as the Pistons backcourt was ravaged by injuries last season, but McGruder will only play if things go extremely well, or extremely poorly for Detroit this year.